In early-1993, Australian unemployment peaked at nearly 12%. In 1992-1995, six of Australia’s eight states and territories ousted their government. By contrast, unemployment averaged 5% in 2003-2006. In these years, no state or territory government was ousted from power.

In Australian politics, conventional wisdom has it that the state government oustings of the early-1990s were due to bad leadership, while the victories of the early-2000s were due to skill. But could it be that Carr wasn’t more skillful than Cain & Kirner, just luckier? In a paper that we released last year, Mark McLeish and I showed that Australian state governments were more likely to lose office when the national economy turned sour.*

To check that our results weren’t being driven merely by the modest contribution that state leaders make to economic performance, we were able to show that our results held up even if we only used a purely unrelated source of growth – the US economy. Here’s a chart that shows our central result: the bars indicate the share of state governments losing office in each 5-year period, while the line is the US unemployment rate.

Why do Australian voters turf out their state governments when the US economy tanks? The answer seems to lie in something psychologists call ‘the fundamental attribution error’, which is the fact that humans aren’t very good at separating situational factors from ability when making assessments. So for example managers tend to be bad at taking task difficulty into account when assessing their workers, sports fans don’t appropriately adjust for field conditions when judging ability, and shareholders tend to overpay CEOs when the market booms. Consequently, it isn’t all that surprising that voters aren’t very good at separating out the component of economic growth that lies within the control of state politicians from factors outside their control.

But the fundamental attribution error doesn’t just affect Australian state elections. In earlier work, Justin Wolfers showed that luck affected US state elections in a similar way (though Australian voters seem a little more gullible than their US counterparts). And in work on national elections, I’ve recently shown that when the world economy slumps, national leaders tend to get voted out of power.

Here’s a chart plotting world growth against re-election rates over recent decades (I exclude the US and Japan, since they make up a large share of world GDP). 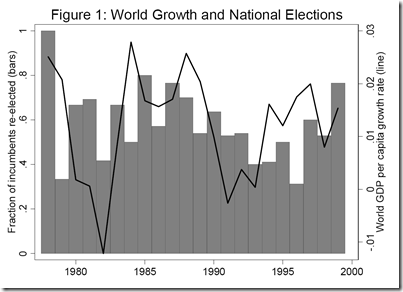 One last prediction. I’m guessing that the prognostications of the pundits will over-emphasise competence and under-emphasise luck. After all, it’s not just voters who commit the fundamental attribution error.

This entry was posted in Uncategorized. Bookmark the permalink.